A cold front will pass through the Midsouth on Monday and become
nearly stationary over central Mississippi Monday night. Showers
and thunderstorms will bring periods of moderate rainfall prior
to frontal passage Monday afternoon. As moisture from the Gulf of
Mexico intersects the stationary front over central Mississippi
Monday night, the likelihood of persistent moderate to heavy rain
will increase north of the front. By Tuesday afternoon, rainfall
of 3 to 5 inches will be possible, mainly south of a Clarksdale
to Oxford to Tupelo line. Soils will be near saturation at the
onset of rainfall Monday. In addition to lowland flooding, river
flooding will be possible over north Mississippi and along the
Tennessee River, into southwest Tennessee. NWS 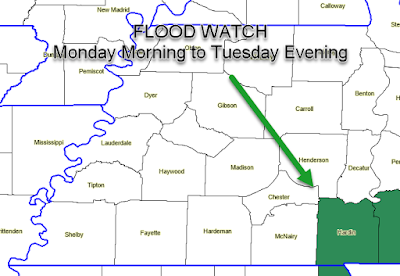 The National Weather Service in Memphis has issued a

* From Monday morning through Tuesday afternoon.

* Rainfall of 3 to 5 inches with locally higher amounts are
possible, with pre-event soils near saturation.

* Low-lying areas and areas adjacent to rivers may flood.

ROUND TWO...Wednesday and Wednesday Evening

After a break from heavy rain on Tuesday, another surge of rainfall is expected mid-week.  There will be the possibility of more intense rainfall over a shorter period.  Below is the NWS projection of rainfall amounts from Monday morning to mid-day Thursday. -  NWS/WTWO