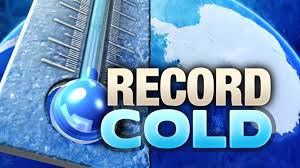 The low temperature this morning at the North Jackson Climate Station was 19 degrees.  This set a new record low for February 22nd. The previous record was 22 degrees set in 2009.

Additionally, the high Friday was 43 degrees.  This sets a new record cold maximum temperature for February 21st.  The previous record was 44 set in 2013.