For all outlooks, the probability values represent the chance of severe weather occurring within 25 miles of any point, which is about the size of a major metropolitan area.

As an example, if you have a 15% probability for tornadoes, this means you have a 15% chance of a tornado occurring within 25 miles of your location. 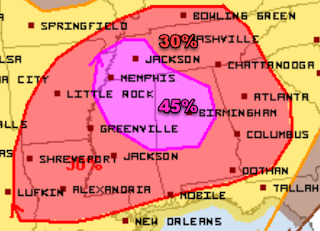 
ALL INFORMATION PROVIDED BY THE STORM PREDICTION CENTER
Posted by WTWO at 4:38 PM