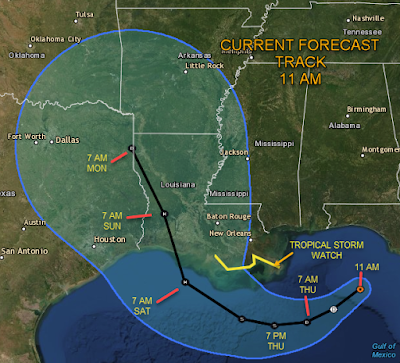 1. A tropical depression is expected to form later today or
Thursday. Conditions appear favorable for this system to strengthen
to a hurricane at it approaches the central Gulf Coast by the
weekend.

2. Dangerous storm surge is possible in portions of southeast
Louisiana and a Storm Surge Watch has been issued for this area.
The risk for dangerous storm surge impacts also exists farther west
along the Louisiana coast into the Upper Texas coast, and additional
storm surge watches may be needed later today or tonight. Residents
in these areas should monitor the progress of this system and listen
to any advice given by local officials.

4. The system has the potential to produce very heavy rainfall along
and inland of the central Gulf Coast through early next week. For
more information, see products from your local National Weather
Service office and the NOAA Weather Prediction Center.