HURRICANE WATCH ISSUED FOR PORTIONS OF THE SOUTHERN COAST OF LOUISIANA 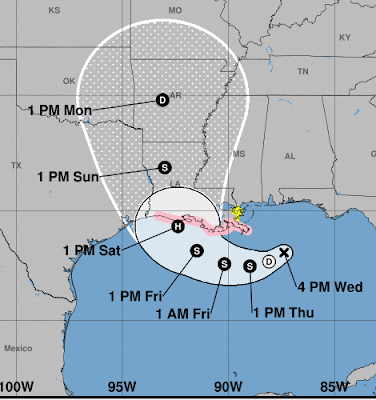 ...HURRICANE WATCH ISSUED FOR PORTIONS OF THE SOUTHERN COAST OF
LOUISIANA...
...HEAVY RAINS EXPECTED TO CONTINUE ACROSS THE CENTRAL GULF COAST...

The Storm Surge Watch has been extended westward to Intracoastal
City Louisiana.

A Hurricane Watch has been issued from the Mouth of the Mississippi
River westward to Cameron Louisiana.

A Tropical Storm Watch has been issued from north of the Mouth of
the Mississippi River to the Mouth of the Pearl River.

1. A tropical depression is expected to form by Thursday over the
northern Gulf of Mexico. Conditions appear favorable for this system
to strengthen to a hurricane that will bring storm surge, rainfall,
and wind hazards to the central Gulf Coast.

2. A dangerous storm surge is possible in portions of southern and
southeastern Louisiana where a Storm Surge Watch is in effect.
Additional storm surge watches may be needed later tonight or
tomorrow. Residents in these areas should monitor the progress of
this system and listen to any advice given by local officials.

3. A Hurricane Watch has been issued for much of the Louisiana coast
and additional tropical storm or hurricane watches could be needed
later tonight or tomorrow. Residents in the watch area should ensure
they have their hurricane plan in place.

4. The slow movement of this system will result in a long duration
heavy rainfall threat along the central Gulf Coast and inland
through the lower Mississippi Valley through the weekend and
potentially into early next week. Flash flooding and river flooding
will become increasingly likely, some of which may be significant,
especially along and east of the track of the system.